The 2015 French Open Final was a battle. The entire tournament had plenty of surprises. Stan Wawrinka dispatching Roger Federer easily and Novak Djokovic following suit with a routine win over Rafael Nadal. There would be a new French Open Champion for the first time since Roger Federer grabbed the crown in 2009. With Djokovic the heavy favorite over Wawrinka with odds makers, what if anything could Wawrinka do to overcome Djokovic in this years final? We’re a about to find out, but not by looking at the match with the traditional numbers, this article will look at it with numbers you don’t usually see on a TV broadcast.

How many shots does it take…
One of the more interesting statistics from any match is who won the most points by rally length. This match was interesting, Djokovic playing the role of retriever, or so it seemed and Wawrinka dictating with his powerful ground game. The numbers tell a very interesting story. We can see in the chart below that rally’s in the 1-4 shot range were won predominantly by Djokovic with a 63-48 edge. Points that lasted 5-9 shots favored Wawrinka considerably. When the points were extended to 10-14 shots Djokovic held a significant lead which isn’t surprising. What’s surprising is that Wawrinka came out on top in the extended rallies of 15 or more shots with a 9-7 advantage in points won. 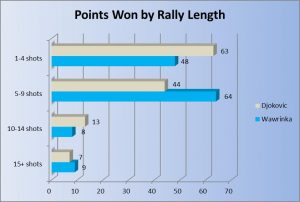 Stan certainly did get aggressive in this match, and he played patterns that helped him do that on his own service games. On his own service games Stan was looking to set up serve +1 forehands. A serve +1 is the first ball the server sees in the rally off the opponents return, the third ball of the point. Of the serves Wawrinka hit that weren’t aces, 51% of them were wide, 30% were down the T and 19% were at the body. With as good as Stan’s backhand is, hitting such a high number of wide first and second serves allowed him to get plenty of serve +1 forehand opportunities. He wanted forehands not backhands on that first ball.

Stan found his forehand on the serve +1 67% of the time. Of the 60 forehands he hit, he was able to do damage or hit a winner against Djokovic 33 times. That isn’t to say the Wawrinka backhand wasn’t an effective shot in this match, but Stan had a very clear plan on his service games and he executed it well.

The Djokovic Serve +1 and how Stan countered it
The most interesting thing to me about this match was Djokovic’s inability to put Wawrinka away from the back of the court. Even on his own service games Novak had plenty of trouble keeping Stan at bay. One category you’ll never see in tennis stats is the term “damage”. I like to chart it when I tag matches to see how aggressive a player is and to see how effective they are at capitalizing on the opportunities they’ve created. Damage is when you hurt your opponent with your shot, either by using pace to hurt them or the placement of your shot to get them off balance. As we see below, Djokovic did a great job of delivering “damage” with his serve +1 combo. 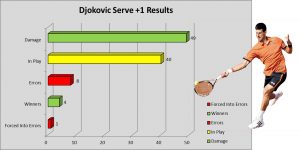 What we can see from the chart is that Novak hit four winners on his serve +1 and did damage 49 times. There were missed opportunities to be more aggressive, particularly with his court position, but on his own serve +1 he did plenty of damage. The key to how Stan countered Novak’s serve +1 damage is told through Stan’s court position on the next ball. As a refresher, you can see the four zones of court position pictured below.

Knowing when to back away…

One reason Djokovic was able to be so aggressive was because Wawrinka sliced a large number of return of serves back in play. That gave Djokovic plenty of chances to step up inside of Zone 2 and do damage to Stan with his serve +1. Stan successfully countered this by playing the fourth ball of the rally from Zone 4 when he knew Djokovic was going to attack. Wawrinka did something most of us don’t do, he knew that many of his returns were weak, so in preparation for aggressive shots he stepped back to give himself time to counter. The numbers are staggering…

Of the 49 times Wawrinka was hurt by Djokovic on the Djokovic serve +1, Wawrinka hit his next shot from Zone four 92% of the time. Of the 49 points where he took damage against Djokovic’s serve +1, Wawrinka was able to recover and win 25 of the 49 points. That means that when Djokovic hurt Wawrinka with his serve +1 he actually lost more points than he won.
Tactics + Brute Force
The last reason why Wawrinka was able to overcome Djokovic was his ability to hurt Djokovic from every part of the court. The number of winners that Stan hit wasn’t amazing, it’s where he hit them from that gave Djokovic so much trouble. Stan was able to hurt Novak from areas of the court where other players simply couldn’t. Take a closer look at the chart below for more details. 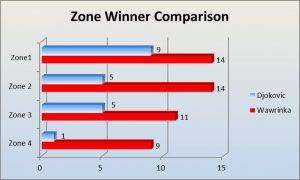 Stan hit more winners from every zone of the court. Look at Zone 4…..an area where it can be nearly impossible to hit winners from, Wawrinka 9-1. That’s really a testament to how much power and spin Stan is capable of generating when he has time to swing.
Conclusion
• Wawrinka bested Djokovic in the 15+ rally category winning 9 points to 7
• Stan used specific serve placement to set up serve +1 forehands
• He countered Djokovic’s serve +1 damage by defending well and playing from Zone 4 on the fourth ball of the point when necessary
• He was able to hit through the court with hard and heavy shots from every Zone
• He played tactically sound with his position and shot selection, but also took plenty of risk to keep Djokovic off balance