It shouldn’t come as a surprise that Roger Federer was able to beat Novak Djokovic in the semifinals of the Shanghai Masters. After all, Federer holds a 19-17 head to head advantage and has wins against Djokovic on hard and clay courts this year. What was surprising was the way that he did it, a balanced attack which allowed him to win the court position battle against Djokovic. It started with the first ball he hit off the Djokovic return of serve. “The serve +1”.

When Federer served to Djokovic the first ball Federer hit off the Djokovic return was a forehand 58% of the time (30/52). Of those 30 first ball forehands , Federer made just 3 errors, hit 2 winners, and put 25 of them back in play. He was aggressive at the right times and applied pressure without playing recklessly. 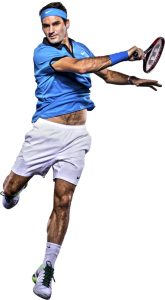 Federer put 45 returns in play off the Djokovic serve. The most interesting thing is what he did with his return placement.

Roger had a very clear strategy, not only on his return of serve but also when he approached the net. It was pretty clear from the early going that the emphasis was to take away the angles and to play to the Djokovic backhand on the first shot of the point when returning serve. Unlike Federer, who hit 58% of his first balls as forehands when serving , Djokovic found his forehand only 33% of the time when serving to Federer. Djokovic had 60 first ball touches off the Federer return of serve, 39 of them were backhands. Djokovic has a very good backhand, but Federer found a way to get the ball to that side almost 2/3 of the time when Djokovic was serving.

Zone 1: (service line to net). Unless you’re stretched or have a ball at your feet this is where you have the chance to “FINISH” the point.

Zone 2: (baseline to service line). With most balls in Zone 2 you have the opportunity to move forward and get “AGGRESSIVE”. You should look to do damage and hit winners from here.

Zone 3: (baseline to halfway to the fence). Most errors are made in this zone, and most shots are typically hit from the “NEUTRAL” zone in tennis today.

Zone 4: (halfway back from the baseline to the fence). As we’ll see, ending up in Zone 4 is rarely ideal and typically means you’ll be playing “DEFENSIVE” shots. 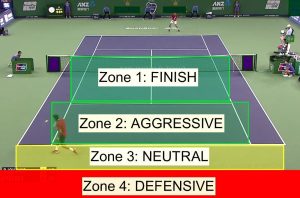 Not only did Roger spend less time in Zones 3 and 4 but the time he spent in them was more productive.

Federer committed just 2 errors from Zone 4 while Djokovic accumulated 10. Federer also had more winners inside the baseline in Zones 1 & 2 by a tally of 17 > 13. Overall, Federer did a better job of mixing up his attacks, he avoided getting pushed back into Zone 4 and he pushed Djokovic deeper behind the baseline more often. The combination of varying his tactics (serve and volley) alongside with his ability to make a high percentage of first serves allowed Federer to dictate play with controlled aggression.

The numbers tell the story

The last area that confirms Federer’s dominance in this match are the rally stats. I categorize the rally lengths into four different categories. The categories are listed below.

In the 2014 Wimbledon Final Djokovic dominated Federer when they played long points. Djokovic won 65% of the points that lasted 14 shots or more. In Shanghai the tables were turned…

You can see from the numbers that Federer was most effective in the 5-9 shot category, winning 33/56 points played. He was able to do damage in the rally with his forehand or take the opportunity to come in behind a damaging shot to finish the point. The big turnaround from the Wimbledon final was his ability to beat Djokovic in extended points. Combining the categories 10-14 and 15+, we can see that Federer held a slight edge 9 points to 8. The final area that Federer improved in was hit ability to hit his running forehand more effectively, he committed just 6 errors when Djokovic made him run to his forehand side.